On a six-string guitar, Nashville tuning involves replacing the four lowest strings with thinner strings tuned an octave higher than normal. This gives an acoustic guitar a tighter register in the upper register, which does not interfere with the bass register, resulting in recordings where the sounds of the instruments are well separated and better defined.

To get the necessary strings, it was customary to halve a twelve-string guitar set by taking those octaves with the lowest strings… and keep the other six for a “normal” guitar. But some manufacturers now offer sets specifically for Nashville tuning.

A particular variant of the Nashville string was used by David Gilmour for the ethereal arpeggios accompanying Pink Floyd’s Hey You: here, the low E is even tuned two octaves above normal, so that the two extreme strings are the same, and the whole six notes of each chord are confined to an interval of less than an octave.

N. N.B.: in France, electric guitarists still sometimes use the expression “Nashville mounting” to refer to a standard tuning made with extra-light strings, this habit having been adopted in the mid-1960s when the fashion of replacing the low E string by an A, the A string by a D, etc., became widespread, since at that time only electric string sets with a strong pull, comparable to the gauges used for acoustics, were available with a spun G string.

It’s best to just go out and buy a set of ’12 string’ strings. You can make your own set if you like (and know what your doing) but buying a set means the gauges should be pretty well balanced. It also has the benefit that you get two sets in one. A regular gauge set and a high strung set!

I go for a Martin Light set. The high strung set works out as follows:-

Here’s how it sounds.

The G string needs to be a light gauge as it’s tuned pretty high (a minor third above the high E string) but you’ll find it rarely breaks and won’t put any real pressure on the neck.

When changing string gauges like this (especially when coming from a very heavy gauge) your guitar neck can change. If you plan on having a guitar set up permanently with Nashville Tuning you may want to get it set up.

This will also depend on the quality of the instrument. Guitars made from inferior woods are likely to react to tension change more than guitars made from quality stock. In any case the chances of any damage are pretty darn slim if using this tuning for the duration of a session. Guitars are pretty tough!

I know I shouldn’t have to say this but ‘DO NOT’ try this with standard gauge strings! It’s likely your guitar will snap in half!

Like I said earlier when used with a regular tuning the effect is very similar to that of a 12 string guitar. Here’s the Hi and Low tunings played together on the open strings.

When tracking strummed guitar parts the effect is not as dense as two regular tunings. What you get instead is a brighter version. This can really add sparkle to your mixes. I prefer this as it’s not just adding more of the same thing, what you get is a different texture. This may not be suitable for every track but it’s worth knowing if you want to add some extra zing!

It also has one very cool option that you don’t get with a 12 string guitar…. Panning! Having the tunings on different tracks means you can get a kind of stereo 12 string effect which can be great in a mix.

This can also work great on guitar parts that are more picked or fingerstyle orientated. Here’s an example using a DADGAD tuning (you can do the Hi Strung tuning to any open tunings you like as well!), the first is panned center as if to mimic a 12 string.

And hear it is in stereo which gives a more double tracked effect.

Using Nashville Tuning with a Capo

One thing I like to do to get big acoustic guitar parts is to use this technique with a capo.

Of course the higher you go you start to produce effects that sound like a mandolin, which can be really nice!

On a side note there is no way to cheat the Nashville Tuning using a capo, you have to restring the guitar. When using the capo to double track your essentially harmonizing the chord tones in the lower part instead of doubling them with octaves and unison notes, thus producing a more harmonically complex sound.

On the other hand they are very handy for placing chords in a certain pitch/frequency range in you mixes. If you don’t have a capo, go out and get one!

This technique is not just for acoustic guitars. You can achieve some really nice effects with electric guitar too. It works great on everything from power chords to picked arpeggio passages, even solos! 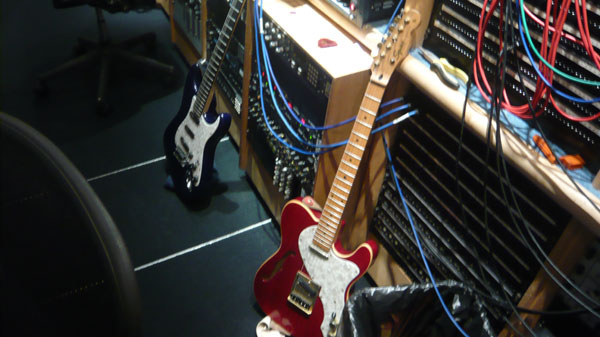 When I do this on electric guitars I use a pretty similar string gauge as the acoustic. You can add different effects to the high version and all sorts. One cool thing is to delay the high part by either adding a delay at 100% wet or even shifting the audio file in your DAW. It’s like pitch shifted echo! Give this one a try!