If you don’t connect your iPod to your mixing desk with the right cable, you’ll lose half your sound!

You may think that when you buy an iPod, all you need to do is load it with a bunch of backing tracks and simply plug it in to your PA system and you’re all set and ready to go…

Well, actually that’s quite correct – it really is that simple to connect an iPod to a PA system, but you would be surprised how many people write to me every week who have done this but find that they get either a very poor sound quality and/or low volume levels, and they can’t figure out what they’ve done wrong!

Nine times out of ten, the mistake that I find singers make when connecting an iPod to their PA/mixing desk, is that they use the wrong type of cable and/or only use ONE channel on their mixing desk (usually they’ve tried to take a jack out of the iPod in to one spare channel of their mixer). Remember, the iPod is stereo so needs TWO inputs on your mixing desk.

I often hear of singers (wrongly) using a single jack to jack cable (usually with a 3.5mm jack at one end and a quarter inch/6.3mm at the other). This is NOT the correct cabling for connecting your iPod to your PA/Mixing desk!

Just think about it for a moment…when you buy an iPod it comes shipped with a set of earphones which consist of ONE 3.5mm jack going to TWO earbuds. So, this means that the iPod is designed so that ONE jack takes the audio signal out of the iPod, but this signal goes in to TWO places (ie your left and right ears). So, if you want to connect the iPod to your PA/mixing desk, you need to apply the same cabling configuration – ie use two input channels on your mixer. The mini-jack/earphone output of the iPod is stereo which means it sends out both Left and Right channels (which is why you have two earphones of course)! So, as you can imagine, if you connect a cable which has only one jack at the mixer end and is plugged in to one input channel of your mixing desk, you will only get a partial sound (ie only one side of the iPods output).

Even if the jack you use at the mixer end is a stereo jack, the input channel on your desk is mono, so you will still only get half the sound. It’s worth noting that even if your desk is mono and/or you run your amplifiers or PA in mono, you still need to use TWO inputs of your desk for the iPod because the issue is not one of whether you work in stereo or mono – the issue is that stereo actually simply means two channels (Left & Right), and in order for you to hear the FULL sound of any stereo device you connect, you need to feed a Left and Right signal to it, regardless of whether your PA system is set up in mono or stereo. 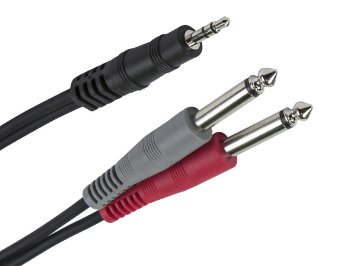 By connecting your iPod in this way, the full signal (Left & Right) will come out of the 3.5mm jack in your iPod and the two jacks at the other end (XLR or 6.3mm) will feed both those Left & Right signals in to two channels of your mixing desk – resulting in a full sound with nothing missing.

Troubleshooting
If you are using the proper cable and have correctly connected your iPod to your mixing desk, you should now have a perfect sound and no more problems. However, if you are still experience sound problems (and don’t know what’s to blame), I’ve devised a fairly simple test which should help you troubleshoot your system.

Even if you don’t have any problems and you are quite happy that your cable, iPod and PA are all working just fine, I still recommend you run this simple test – it’ll only take you a couple of minutes (and you may just discover that not all is as well as you thought)!

The test uses a process of elimination to troubleshoot the problem, and goes through each possible problem area step by step, so make sure you complete the test in the proper sequence using the steps below:

Step 2: Check that your iPod is putting out the correct audio signals by connecting earphones/headphones to your iPod and “playing” the audio test file. Do you hear the “left channel” and “right channel” spoken audio coming through the left and then right sides of your earphones? If the answer is “yes”, then you have now established that your iPod is working properly and is correctly giving out proper left and right audio signals. Now move on to step 3.

If the above test fails at step 1, you haven’t downloaded the audio test file properly or transferred it to your iPod properly.

If the test fails at step 2, your iPod or earphones are faulty.

If the test fails at step 3, your microphone or one or both channels of your mixing desk are faulty.

If the test fails at step 4, then your cable is faulty.

Setting the iPod volume level
The other thing that singers often write to me about is “low signals” or “low volume” problem. There is a simple solution to this…turn up the volume! OK, OK, I know…if it was that easy, everyone would just do it and wouldn’t be writing to me and asking about it! And the reason many people don’t know how to set the iPod’s volume control is because it is kinda “hidden” (by that I mean that it is does not have a master volume control in its settings menu as you would expect). It does have a “volume limit” control in the “settings” menu (which I recommend you set to just a little below maximum) but to set the main volume, you need to have an actual song playing before you can do this (a bad bit of designing Apple – shame on you)!

So, to adjust the main volume, when a song is playing, turn the click wheel clockwise and this will increase the volume. I like to keep this volume level just a little below maximum too. The reason I suggest this is that this volume setting will give a fairly high output signal so you don’t need so much gain at your mixing desk (and it also maximizes the signal to noise ratio keeping background noise down and giving a much cleaner signal).

And, while I’m on the subject of setting the correct gain on your mixing desk, I must stress very strongly that you MUST make sure that you set the controls on your mixing desk correctly before you connect the iPod to it, especially the gain control (sometimes known as the “trim” control). If you don’t know what I’m talking about, then it is essential that you read my article on setting volume levels BEFORE you go plugging your iPod in to your PA system!