Using consumer microphones into professional audio equipment doesn’t often come up, but sometimes it has to happen. The problem is that pro audio gear usually has balanced inputs presented on XLR sockets, while consumer signal sources come presented as an unbalanced signal, usually a 1/4 in or 3.5mm TS jack for a microphone. Grounded consumer sources can cause hum by introducing ground loops into the system, but microphones usually float free of mains earth.First, if the consumer mic jack plug is not molded on, or will be cut off anyway, examine the microphone cable. If the cable has two cores and a shield, then it is a balanced cable wired to an unbalanced jack, and the cable can be wired to an XLR3 connector as a balanced connector as described in the article how to wire a XLR plug. The mic then becomes a regular balanced microphone. If the cable has a shield and just one core, or the plug is molded on and has to be kept, then proceed as follows.

The first thing to be aware of is P48 power. This is a 48V supply in series with about 6.8k ohms fed to XLR pins 2 and 3 relative to pin 1 (which is usually at ground potential). It is a common way to power professional microphones. Many mixers can be switched in sensitivity between microphone level and line level, but the phantom power supply may be present in both modes unless explicitly switched off.P48 power has the capacity to seriously harm the consumer microphone and must be switched off before a consumer source is connected to a professional input. On mixers there is usually a switch and associated LED to indicate phantom power on, but some items may have the phantom power enabling set in a menu somewhere. Before proceeding be absolutely positive that phantom powering is switched off.

Set The Mixer to Microphone Level Not Line Level

Consumer microphones output at low levels, anything from 25mV for 96dB SPL (loud!) for a sensitive electret down to a tenth of that for a dynamic microphone. The mixer should be set to microphone level sensitivity, and double checked for phantom power set to off. Some mixers automatically disable P48 powering on line level; it can be re-enabled on switching to mic level. 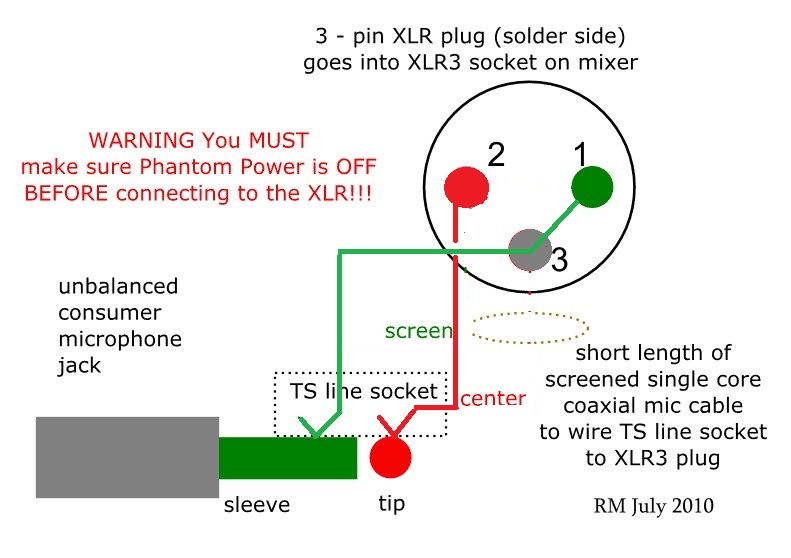 Wire the consumer microphone signal ground to XLR pins 1 and 3 (mixer ground and signal -ve) and wire the consumer signal core to XLR pin 2 (signal +ve).This can either be done as shown in the diagram, with a tip-sleeve line jack socket going via a short section of unbalanced audio single-core coaxial cable to a 3-pin XLR plug to go into the mixer.Alternatively the consumer mic jack plug can be cut off. If the microphone cable has a single center core and shield then it can be wired as follows:

it is a good idea to MARK the XLR connector as unbalanced, and a warning about the danger of phantom power!

An audio transformer can be used to interface the unbalanced microphone to the balanced input, however the cost of a good transformer can be prohibitive, and cheap audio transformers can impair the sound quality.Unbalanced equipment at line level can be interfaced to balanced inputs using a direct-inject (DI) box. If one is handy, it can be worth trying with a microphone but some types of DI box will be noisy with the low impedance weak microphone level signal.A different technique is needed if the requirement is to wire a balanced microphone to an unbalanced consumer microphone input.