From Wikipedia, the free encyclopedia

A block chord is a chord or voicing built directly below the melody either on the strong beats or to create a four-part harmonized melody line in “locked-hands” rhythmic unison with the melody, as opposed to broken chords. This latter style, known as Shearing voicing, was popularized by George Shearing, but originated with Phil Moore.
Block chord style (also known as chorale style) uses simple chordal harmony in which “the notes of each chord may be played all at once” as opposed to being “played one at a time (broken or arpeggiated chords). For example, a guitarist can strum the chord (this would be a “block” chord) or use a picking style to play “broken” chords”. The notes of arpeggios are often grouped into block chords for ease of analysis.
Block chords and doubled melody are easily used in a melody line that has a swing feel and strengthen the melody so as to separate that melody from the rhythmic background. Block chording was often used by jazz bands and orchestras such as those led by Count Basie and Duke Ellington.
Voicings or methods include: 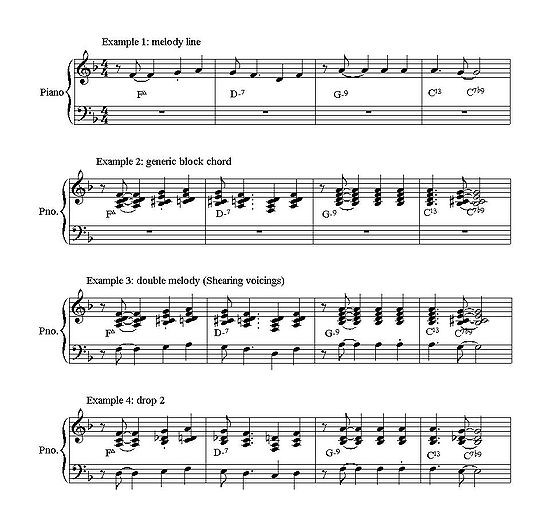