P.A.F. or just PAF is the world’s first humbucker guitar pickup, invented by Seth Lover in 1955 as an engineer for Gibson and began use in mass production guitars in 1956 or 1957. However Rickenbacker and Gretsch had developed humbucking pickups also. Rickenbacker released theirs in 1953 but discontinued it in 1954 because of the ‘distortion‘ it caused.

The strange name (PAF) of the pickup was not intentional. Gibson and Seth Lover first filed a patent on the design on June 22, 1955. After that, Gibson Les Pauls were equipped with these new pickups, with a sticker on a bottom plate of a pickup that said Patent Applied For. A patent was eventually issued on July 28, 1959. Since it took more than four years to get a patent number, the unnamed pickup had been dubbed “PAF” by many guitarists in that period during which the pending application and this naming continued even after the patent had been issued.

PAF pickups can usually be identified by their look: they have two internal coil bobbins under a 1.5″ x 2.75″ metal cover with one bobbin having a row of six adjustable pole pieces, with the other bobbin having non-adjustable pole pieces. Standard PAF pickups had 5000 or so turns[1] of wire on a bobbin and a DCresistance of 7.5 kΩ (early pickups range from 7.5 kΩ to 9.0 kΩ).

The range of 1956-1961 is usually dubbed the era of early PAFs. These pickups were first used on lap steel guitars in 1956, on Les Paul Gold Top, and Les Paul Custom electric solid-bodied guitars in 1957. They replaced the out-dated P90 pickup (invented after WWII) and the best pickup Gibson offered the P90 “Staple” pickup, which was only offered on the Les Paul Custom and the company’s highest end archtops.

These early PAFs tend to differ from each other significantly in terms of output level and tone – many factors are quoted as a reason for such difference:

Early pickups were wound with #42 plain enameled wire, this wire has a purple 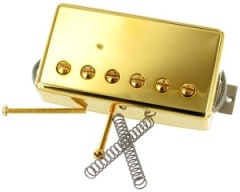 color, as opposed to later varieties(which were poly coated). During July 1961, Gibson standardized the PAF construction process, automatic stops were installed in the winders, which did not cause large differences in output between two pickups.The early ’61 PAFs are almost exactly identical to the 1957-1960 PAFs. By mid to late ’61 a new, smaller Alnico 5 magnetic plate became standard, which is referred to as a “short magnet”. In about 1963, Gibson switched topolyurethane-coated wire to cut costs, changing the wire color from purple to red.In addition these pickups were also given a new sticker that had the “Patent No” written on it, as opposed to “Patent Applied For” About 1965-1968, automatic pickup winding machines came into use, thus making pickups that had a consistent number of turns and a fixed DC resistance. After about 1967, the original PAF design changed. These pickups are referred to as “Pre-T-tops”. Gibson began to stamp the patent number on some PAF stickers after they obtained a patent (U.S. Patent 2,896,491) for the PAF pickups. Most humbuckers were labelled with U.S. Patent 2,737,842 until 1962 and the number shown on the pickups, which actually is a patent for a Gibson trapeze tailpiece bridge and not for a pickup at all. Both true PAFs and incorrect patent marked PAFs are fairly rare today and make an expensive vintage collectors item. By the early 70s Gibson began putting a T-shaped toolmark on their pickups’ bobbins. This helped the workers make sure that the bobbin was facing the correct way during assembly. During the production of this pickup many original specifications changed, like the use of a wooden maple spacer (replaced by plastic), and the thickness of the magnet (got thinner). These pickups are referred to as “T-tops”. Production of these pickups continued until the late 70s/early 80s.

By 1981, Gibson realized that there was a market and consumer demand for these older pickups. They assigned engineer

Tim Shaw to research and create a re-issue of the older PAF pickups. Gibson at the time were now releasing Les Pauls that were built to somewhat vintage specifications for the first time (these guitars would later be called pre-historics, as they were the pre-cursor to the Gibson Custom Shop re-issue line, which built to vintage specifications). Tim Shaw researched and tried to recreate the old toolmarks and other details that made these pickups what they were. Unfortunately, under the strict Norlin owners, many of his ideas were seen as too expensive and not cost effective. However Shaw was able to re tool the bobbin without the “T” that had been used throughout the past decade and re-introduce the correct square hole back into the bobbin, and more importantly use a thicker magnet which was the correct thickness to magnets used in PAFs. He also discovered that the wire used was enamel. Realizing that they used poly-coated wire, he tried to convince corporate that they needed the enamel coated wire. At the time however the enamel coated wire cost about 1 dollar more, and was not approved to be bought or used. He also found old sheets that explained the number of winds used, and even contacted the original designer Seth Lover and spoke to him about parts used on these pickups. Tim Shaw’s efforts, even though not reaching the desired end goal he wanted, were a big leap forward in finding out information about these pickups. His efforts were considered by many to be the first in the long journey many would take in re-creating the PAF humbucking pickup.

Nowadays, the PAF is considered a vintage humbucker with relatively low output and soft, mellow tone. However, original Gibson PAFs are scarce and very expensive, so most major pickup manufacturers produce copies of original PAF design.